The last – and only – time Kevin Mayer, Ashton Eaton and Roman Sebrle met in person was at the London 2012 Olympics.

The three decathlon stars – all world record-holders in their time and the only members of the 9000-point club – came together virtually for a special edition of the World Athletics podcast to discuss all things combined events.

Mayer, who was just 20 years old at the time of the London 2012 Games, recalled that first Olympic experience.

“It was huge,” he said. “I went there as the only French decathlete, I didn’t speak good English, I was lost. I didn’t say a word to Ashton or Roman – they were my idols, so I just stayed in the shadows watching them wide-eyed. I was more of a spectator than a performer.

“The competition didn’t go particularly well for me, and I recorded two fouls in the long jump. But it was the start of something I was able to build on. Competitions can’t get more stressful than the Olympics, so other competitions in the years that followed felt easy in comparison.”

Download the full podcast for free via iTunes or Spotify.

All past episodes, including links to the podcast on a range of streaming platforms, can be found on Audioboom.

Eaton won on that occasion, while Sebrle withdrew after the first event, having aggravated an injury. It was to be the Czech legend’s final competitive appearance.

Some 11 years prior, Sebrle had become the first man to break 9000 points with his world record score of 9026 in Götzis.

“I expected a few of the events to go better, like the shot put, the hurdles, the pole vault,” remembers Sebrle. “After that competition I thought that I’d go on to score 9000 points in all of my other competitions, but it didn’t work out that way.”

“I never experienced perfection in a decathlon,” said the 33-year-old, who retired after winning his second Olympic gold in 2016. “I think it’s a personality thing – you always want more and you always believe that you have more. Any small mess-up, you think ‘dang it, I left something there’. That was always the motivation, even when the scores were good.”

When it comes to all-round excellence, though, Eaton spoke highly of Mayer, the current world record-holder with his 9126 tally from 2018.

“I want to set the record straight,” said Eaton. “I think Kevin is the greatest athlete we have on earth right now. In the United States we always hear stuff about LeBron James or comparisons to other sports, and people often tag me into conversations on social media. I’m just like, ‘man, you guys have no clue’. When you see what this guy did for running, jumping and throwing over these events, it’s unbelievable. I don’t think anybody understands.”

Mayer was flattered by the compliment. “Wow, when Ashton Eaton compares you to LeBron James, it feels really great,” said the 2017 world champion.

“I think we all got into this sport because we enjoyed the 10 events and we liked the sensation when we progress. You always want to improve and to become greater and greater.”

“The best thing is, you never know,” said the four-time global champion. “I think Kevin will compete very well and could improve a bit more on the record. But there could well be another guy who comes along and has the same feel for the event, the same motivation, the same drive for a world record, and will succeed like we did. You never know.”

BACK
Pages related to this articleAthletes
Roman Sebrle 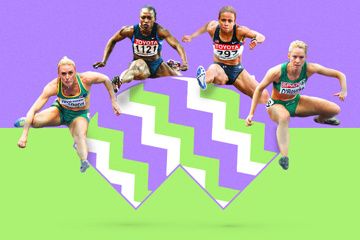 Sustainability blog #1: Ratingen gives the Athletics for a Better World Standard a spin