Next in our mini-series plotting athletes’ journeys from the World Athletics Championships Doha 2019 through to the rescheduled Tokyo Olympics, we speak to world decathlon champion Niklas Kaul.

The indoor season is up and running; when do you next plan to compete?

Niklas Kaul: I hope to compete again in the next couple of weeks. I’m not planning on doing a full indoor heptathlon but hopefully a 60m hurdles and maybe the pole vault. It is really exciting to compete again. My last competition was back in May/June when I did discus and shot at a small competition.

If we go back to your stellar 2019 season, that year you set a PB in all three decathlon competitions and claimed gold at the European Under-23 Championships and World Athletics Championships. Why did all the pieces of the puzzle come together so well that year?

NK: The good thing about 2019 was I was able to train consistently without injury or illness issues. My main goal for the season was to win the European U23 Championships, so after winning in Sweden with a PB of 8572, by the time I arrived in Doha the pressure was off. I think that was the main reason why Doha went as well as it did for me.

You have such a strong back end of the decathlon with an outstanding javelin and 1500m. Knowing your best two disciplines are events nine and 10, does this often lower the pressure you face in a decathlon?

NK: Yes, I think it does. If my strongest events were the 100m and long jump, I’d always be wondering if I had enough points throughout the competition. It is better to know that my good events are the last two, and that I have the ability to catch the other competitors.

WATCH: day one and day two coverage of the men's decathlon at the World Athletics Championships Doha 2019

Reflecting back on the decathlon at the 2019 World Athletics Championships, what were your emotions when you first became aware the defending champion and world record-holder, Kevin Mayer, was forced to withdraw from the competition?

NK: It was only after arriving for the pole vault did the other German decathletes tell me Kevin had pulled out because of injury. My first reaction was, ‘oh, no’. It is never nice to see a fellow competitor pull out because of an injury.

You sat 11th at the end of day one of the decathlon and only moved into the top three at the end of the javelin (when Kaul launched a huge 79.05m – the best ever throw within an 8000+ decathlon). At what point in Doha did you believe gold was a possibility?

NK: It was after my 79.05m javelin throw. Before the javelin, I thought maybe I could win a medal but after the javelin I thought maybe I can win this competition. I was about 70 points down leading into the 1500m. It was not easy. I just knew I needed to run as fast as I could to win gold.

NK: It felt unreal. Tim Nowak (fellow German decathlete) was one of the first people to speak to me and said, “you are world champion” which was the first moment it dawned on me what I’d achieved. I had so many emotions; I smiled, laughed and cried.

How did your life change following your World Championships success?

NK: The winter of 2019-20 was very different to any other winter. I had a lot more interviews and I was crowned German Athlete of the Year. But during training, when I was once more around my training partners, nothing really changed. Germany boasts such a rich tradition in combined events; why do you think this is the case?

NK: I’m not quite sure how it all started but I think a lot of kids are inspired by seeing the achievements of other (German combined eventers) so they think, maybe I can do that, and they go on to replicate their achievements.

Pre-pandemic, how were your preparations going for the 2020 season?

NK: The winter of 2019-20 went really well and I had no injuries. After Doha I only took five days rest before returning to training. I did this because after the European U23s (in July 2019) my coach (Niklas’s father Michael) and I decided to use Doha as part of the preparation for Tokyo.

How did the pandemic start impacting on your daily life?

NK: I was training with the German combined events squad in March (2020) in Stellenbosch, South Africa. At that time Germany had started to record a lot of Covid cases but in South Africa the pandemic was not a big thing, so we thought we would spend one extra week out there. However, the team manager and head coach said we had to travel home. At that point, I think we really knew the outdoor season would not happen and there would be no Olympics, but we were in the stressful situation of not having confirmation of this. Because of the strict lockdown, for two weeks I had no access to a gym or track and the only training I could do was running on the streets. When the Olympics were officially postponed, I was really happy. It felt like a relief.

How did the pandemic then impact on training?

NK: It took about six weeks to be allowed to train once more at an indoor track. But the problem we faced is we still had another 14 months at that point to the rescheduled Tokyo Games. This did not make it easy to structure training or maintain motivation. We instead focused a little more on gym work, to build strength and on improving my core stability. For a couple of months, I also started to do some 400m hurdles training for something new.

The 400m hurdles. How did that come about?

NK: My father, who is my coach, was a former 400m hurdler and his big dream is to train a 400m hurdles group. The problem was all the guys he coaches all want to do the decathlon! He used to joke that if we didn’t have a good decathlon season, he would make us do a 400m hurdles. I think we all feared this because the event is perhaps the hardest in track and field. But while we had the chance and the time to do something new, I did some 400m hurdles training.

Did it go well?

NK: We only trained to about 250m to 300m with the hurdles and I still don’t know how much the event hurts in the final 100m; I can only imagine! It is perhaps a little more fun than the 400m flat, so maybe I will do some 400m hurdles in the future.

You opted not to compete in a combined events competition in 2020. Why was this the case?

NK: I underwent surgery (UCL) to the elbow in June, although even before this we took the decision not to compete. I’d competed internationally every year since 2015, so we decided to use this time to work on any weaknesses. 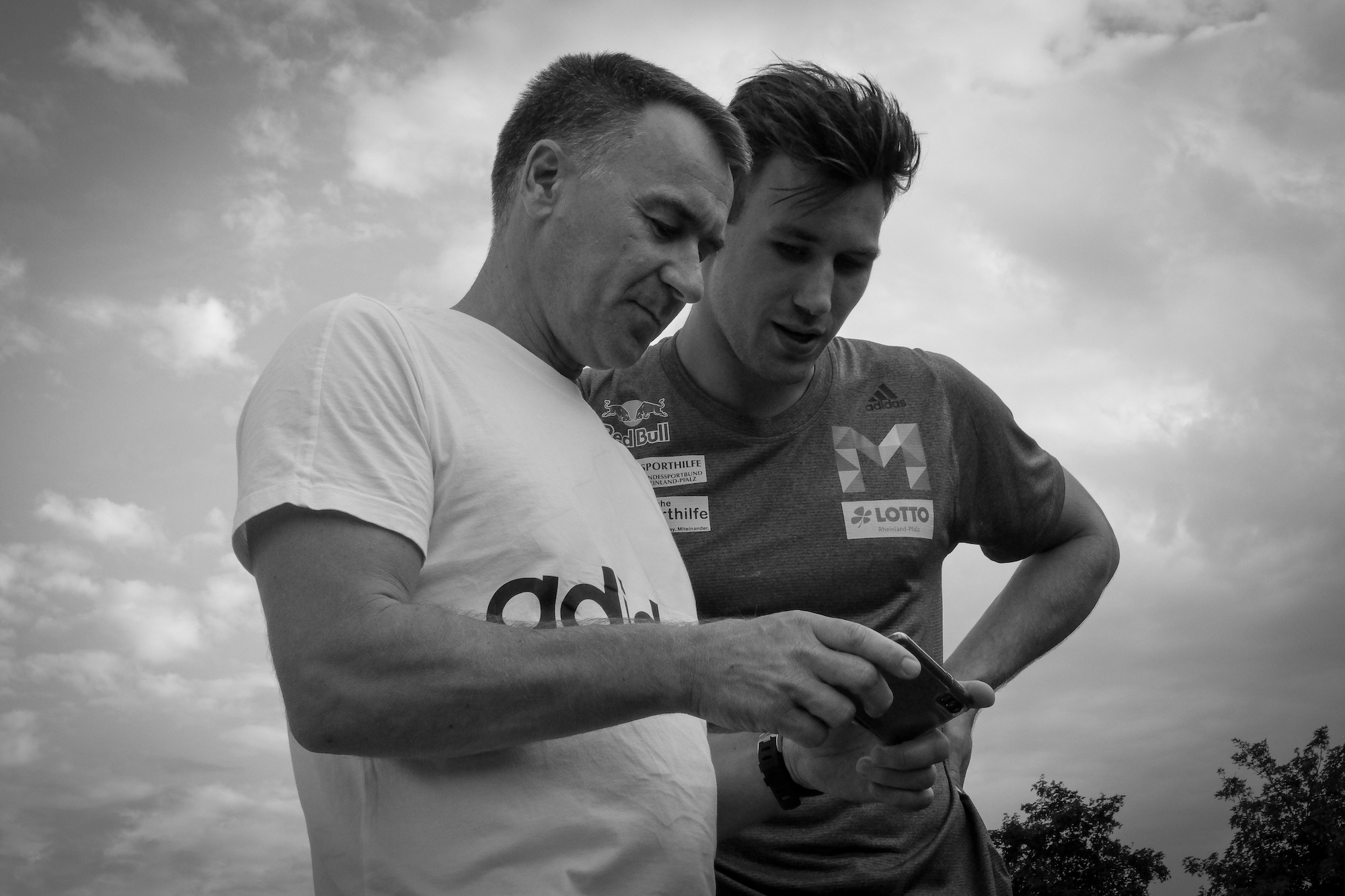 Niklas Kaul at his training base in Mainz (© Michelle Sammet)

When did you return to full training?

NK: I started the preparation at the end of August, and I restarted throwing again (following elbow surgery) in October.

What gains do you think you have made since winning the 2019 world decathlon title?

NK: I have made a lot of progress in the hurdles. The long jump also feels really good.

NK: All the facilities I need in Mainz are open at the moment, but everything else is closed like restaurants and normal university life. Every day looks the same; it is training and then I go home to rest. There is no option to do other things. But I am thankful I have the chance to train and prepare for an Olympic Games. I’m studying physics and sports to become a teacher. I do this for 20 hours a week and this acts as a good distraction from training.

When do you think you will next compete in a combined events competition?

NK: I hope to compete at the end of May in Götzis to qualify for the Olympic Games. If this does not happen, then maybe I’ll compete in Ratingen in June.

What are your aims and expectations for 2021?

NK: That’s a difficult question. We don’t know what the season will look like. In a perfect world my expectation is that six guys will compete for three decathlon medals at the Olympics – and I hope to be one of the six guys! But at the moment, I’m just focusing on working hard and seeing how the season progresses.

You have previously spoken about the inspiration you felt when, as a four-year-old boy, you watched the 2002 European Championships in Munich. What were some of your first Olympic memories?

NK: I remember watching the 2004 Athens Olympics. My main memory was watching Andreas Thorkildsen win javelin gold and watching the handball competition (Kaul was an accomplished handball player in his youth). My goal from this point on was to be an Olympian and I hope to achieve this dream in Tokyo.

BACK
Pages related to this articleAthletes
Niklas KAUL

Sustainability blog #1: Ratingen gives the Athletics for a Better World Standard a spin