Samuelsson: "I want to give my 'Yellow Wall' a show to enjoy"

The stage is Gotzis, on a sun-drenched Sunday afternoon in the last weekend of May. The throb of dance music reverberates around the Mosle-Stadion. Hands are clapping, voices are whooping, and all eyes are on the pole vault beds at the south end of the infield.

A figure in black sprints towards the inner pair of uprights, where the bar is set at 5 metres. The pole is planted safely, and with a flash of blond and white, he is airborne and flying into the blue sky, over the bar and over a lifetime best height. The music is momentarily drowned by the delighted screams from a wall of yellow T-shirts. From their vantage point on the bend, they leap up and down, curly wigs askew and beers aloft, as their hero springs off the pole vault bed and runs towards them in an arc of delight, high-fiving the adoring crowd.

The year is 2017, the wigs are the blue and gold of the Swedish flag, and the wall of devoted fans is for Fredrik Samuelsson, Sweden’s No.1 multi-eventer, as he racks up PB after PB en route to his decathlon lifetime best of 8172.

Four years later, Samuelsson is preparing for his fifth competition in the Austrian alps. “Gotzis is the place where every combined eventer wants to be," he says. "It’s something special in the air. I always want to give back to the audience and my 'Yellow Wall' and give them a show to enjoy. It feels like my second home.”

After the famous meeting was cancelled in 2020, only a limited number of spectators will be permitted to attend the 2021 event due to local coronavirus restrictions. So, the Swedish favourite – whose own preparations have been disrupted by him catching Covid-19 – will need to channel the inspiration of his Yellow Wall – in their “Team Samuelsson” T-shirts – from afar. It will be the first time he has attended such a high profile competition without them in tow.

“I compete with a lot of passion and I like to please the crowd," he explains. “It started in 2012 when I set an age-17 record in Sweden, and my family were there to support me. My mum, brother and sister came to competitions in Europe with me, but then other family members too. And then friends of relatives. At my first international championships in 2013, the European Juniors in Rieti, there were seven or eight people. At the U23 championships in Tallinn in 2015, there were 15 or 16. And it just increased year on year.

"Now it feels like there are always 10-20 people who travel the world to cheer for me. At the championships they walk around with their Swedish shirts, and everyone can see them - and hear them because they scream a lot. I’m always at my best when they are there.”

Somewhere along the way, the omnipresent white headband also made it into Samuelsson’s decathlon battle armour. “I have always had long blond hair,” he recalls, “and one day I thought: I must try a headband because my hair is in the way when I compete. And it became my signature, my identity on the track. I would never do a competition without my headband - it’s the thing that makes people know who I am. I like fashion, and I think it’s cool. Now in Gotzis, when every kid comes and wants to take pictures, they also want the headband. But I can’t give it to them, at least not every year. I did it once!”

Samuelsson’s career best performance in Gotzis in 2017, where he won the “Rookie of the Year” title, was also his first competition over 8000 points. Later that year, he won silver at the European U23s in Bydgoszcz, although injury hampered his World Athletics Championships debut in London. But with top 10 finishes at the European Championships in 2016 and 2018, and top five placings at the European Indoors in 2017 and 2019, Samuelsson is able to channel his passion into consistent championship performances.

“I almost always have a good total score, even when the individual marks aren’t there," he says. "If you put all my personal bests together, it comes to something like 8570. That’s 400 points difference from my PB and a little too much in my opinion. It means I’m capable of more, and I know I have 8300-8400 in my body. I’m just waiting for the decathlon where the weather is good, and the form and flow is there. I would like that to be in Gotzis this year, but it will be hard – like for everyone – without my friends and family there.”

Scores of 8300-8400 would take Samuelsson into the territory of the great Swedish decathletes of the nineties and noughties. Nicklas Wiberg holds the national record of 8406 (set at the 2009 World Championships in Berlin) which overtook Henrik Dagard’s 8403 set in Talence in 1994. Samuelsson sits fifth in that all-time list outdoors but came within a whisker of snatching Dagard’s heptathlon record of 6142 – and a medal – with his score of 6125 at the 2019 European Indoors in Glasgow. 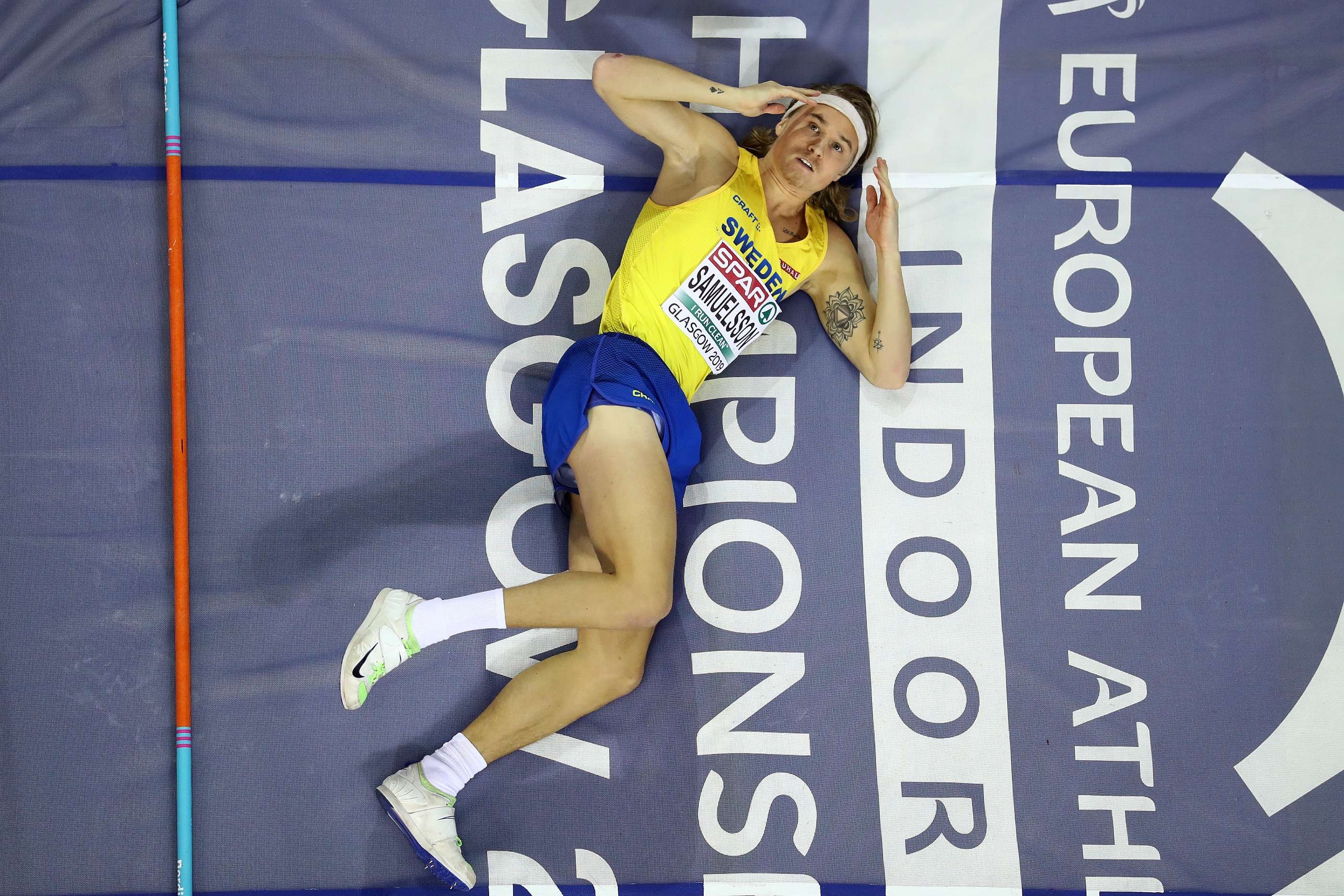 “Glasgow was the biggest achievement of my career when I came fourth,” he recalls. “Only 20 points from silver and bronze and the Swedish record.”

The passion Samuelsson exhibits on the track is also evident in the self-analysis of his performances: honest, soul-searching, and at times brutal. To follow the exploits of the engaging Swede is to also experience the raw emotion of every high, and every low.

“In the weeks after Glasgow, I should have been happy,” he reflects. “But I was angry at myself and felt it really deeply. But then, you must transfer it to something good - look back to what was good and bring that forward to the next competition. Track and field has always been my life - it’s everything for me. It’s not just a fun thing to I do. I want to go to the top, but I know I am too hard on myself.”

Heeding his own advice and transferring the passion into something good, Samuelsson has increasingly been an advocate for change in the sport. His objective is to increase the profile of combined events, and he is leading calls from combined athletes for an increase in field sizes in major championships.

In 2020, Samuelsson was instrumental in breaking new ground at the famous Finnkampen competition, the vibrant annual duel between neighbours Sweden and Finland. For the first time, combined eventers were invited to participate in a “triathlon”, consisting of 400m (200m for women), long jump and shot put. Previously, combined eventers could only participate if they were of a sufficiently high standard in individual events.

“Finnkampen is a big tradition for Sweden and Finland, and it's a fun competition to end the season every year. We worked really hard to get a combined event into the competition. The next step is to have our points count towards the overall score - to have combined events 100% part of Finnkampen.

“I want to get recognition for combined events in Sweden, in Europe and the world. As you get older, and more experienced, you start to think what can be better for the sport. I'm not only competing for myself - I want to make a difference for decathlon and show kids that it’s the coolest event out there.”

BACK
Pages related to this articleAthletes
Fredrik SAMUELSSON