World Athletics opens window of hope for U20 refugee team

At first, it seemed like mission impossible complicated by the pandemic, confinement and lack of competitions in 2020. It was not easy getting these athletes out of the refugee camps, but the dream came true for 16-year-old Joseph Loboi Morris (3000m), 18-year-old Emmaculate Napeyok (200m) and 16-year-old Alice IIam Samuel (800m) at the World Athletics U20 Championships in Nairobi.

In June, World Athletics facilitated travel and full board for an U20 Athlete Refugee Team (ART) selection process at the regional trials that took place in Iten, Kenya, which led to the discovery of these three young promising athletes. They come from the Kakuma Refugee Camp and Kalobeyei Integrated Settlement which at the end of July 2020 registered 196,666 refugees and asylum-seekers, mainly from South Sudan, Sudan, Somalia, the Democratic Republic of the Congo, Burundi, Ethiopia and Uganda. The mission was a joint effort on the part of World Athletics, Athletics Kenya (AK), the Tegla Loroupe Peace Foundation (TLPF) and the UNHCR.

Prior to leaving Kakuma, the team had to undergo PCR tests organised by the latter, then the team had to live in a bubble at the TLPF camp in Ngong for 14 days before moving into the official World U20 Championships team hotel which also required a negative PCR test 48 hours before arrival. Of course, parental approval was fundamental and, as minors, the UNHCR insisted that they travel by plane in order to reduce contact with the public. In addition, the TLPF had to provide a tutor so that the youngsters could continue their schooling once they left the refugee camp, and the team had to be joined by a male and female accompanying person, a role undertaken by Daniel Kiptugen, acting CEO of the TLPF who sadly passed away this week, and Eliza Lopilale, who served as matron. Arcade Arakaza, a refugee from Burundi stationed in Kakuma, took on the role of coach.

Aside from the trials in Iten, it was the first time these athletes had left the refugee camp since their arrival after atrocities in South Sudan forced their families to flee to Kakuma. Although excited, one can only imagine how competing at their first international competition must have been daunting. So, what was going through their minds and how was this experience?

Alice IIam Samuel was the first athlete to compete and ran a 2:43.76 PB in the 800m. She impressed the Italian national coach, who wants to invite the team to compete in Italy some time in the future. 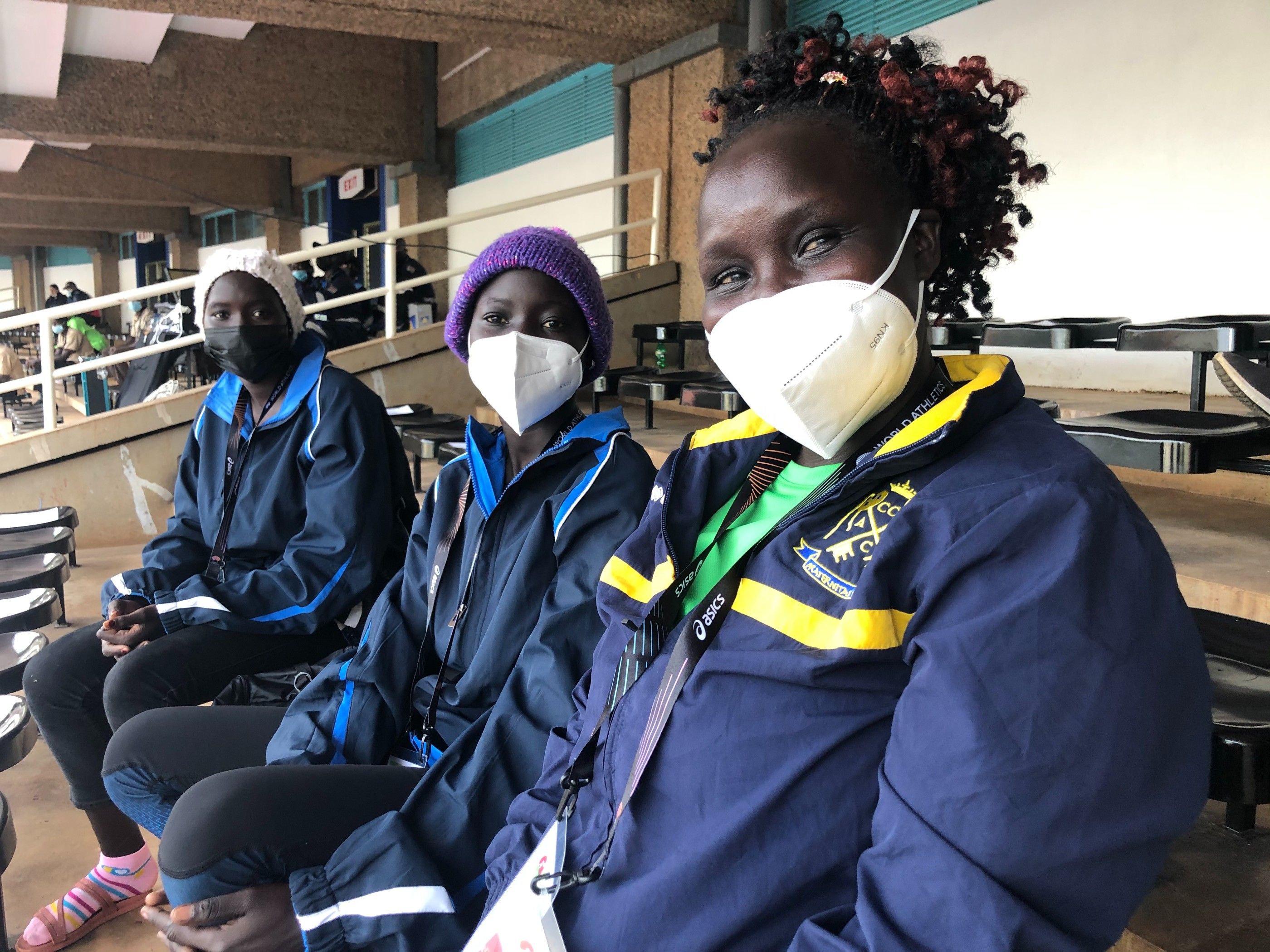 Joseph Loboi Morris explained how his family (six brothers and his mother) escaped South Sudan in 2016. His mother told them: “Dad is dying, and I cannot feed you,” so the whole family had to leave for Kakuma. Until then, he used to spend his days herding cows and goats. Today, he is about to start class 8 at Future Primary School. He says life in the camp is tough, with only one meal of beans or yellow grams per day. Each family member receives one kilo of rice, yellow grams and oil per month. In addition, they receive a monthly SIM card worth 500Ksh (a little less than 4 Euros / 4.55USD ). One day, he hopes to become a doctor and return to his native village, Chukudum, in the Equatoria region, so that he can help his people.

Alice evokes the same tough life at the camp but, as a distraction, when not attending school, she attends athletics training sessions, plays football or cooks for the family. She is currently enrolled in class 7 at Kalobeyei Settlement Primary school and hopes to become a coach.

Then there is Emmaculate, who moved to Kakuma with her mother and sister. Last year, on her own initiative, she left Kakuma Refugee Camp to join the TLPF training camp in Ngong. Unfortunately, upon arrival, she had to make a U-turn because UNHCR formalities had not been followed. She was depressed for a while but coach Arcade encouraged her to join the training sessions at the camp. Participating at the World U20 Championships has been a game changer as she realised that she had a talent to develop. At the same time, she was also sad because she could not continue her education at Kakuma Secondary School as her family could not afford the fees. Learning of this, a well-wisher in Nairobi stepped in and donated the year’s school fees (50USD) so that she could continue her education. As the coach explained: “Most girls that find themselves in similar situations usually end up pregnant or married off. Emmaculate would like to become a teacher."

Loroupe feels that talent like Emmaculate should attend “Kenyan athletics schools” like the one in Iten so that they are scouted early, receive professional training and, at the same time, continue their education. Loroupe often reminds the athletes not to complain because: “If I remove my shoes, you will see all the scars on my feet from the time I was running barefoot”. She encourages them to be patient, disciplined, work hard and to listen to their coaches.

Expressing her gratitude to the IOC and World Athletics for supporting the ART since 2014, Loroupe mentions with pride that this year, three elite ART athletes and one former athlete that transitioned his career within the foundation have received university scholarships to study in Canada and the UK. On 25 August 2021, middle distance runners James Nyang Chiengjiek, Rose Nathike Lokonyen and Paulo Amotun Lokoro headed on a one-year scholarship to Sheridan College in Oakville, Canada. In October this year, former ART member Lam Joar, who has been handling communications for the TLPF, is off to Oxford University for his masters degree. Loroupe says this milestone “will change the course of their lives and those of their families. Without doubt, these athletes would still be in tents in refugee camps were it not for athletics.” They are the models for the U20 athletes. 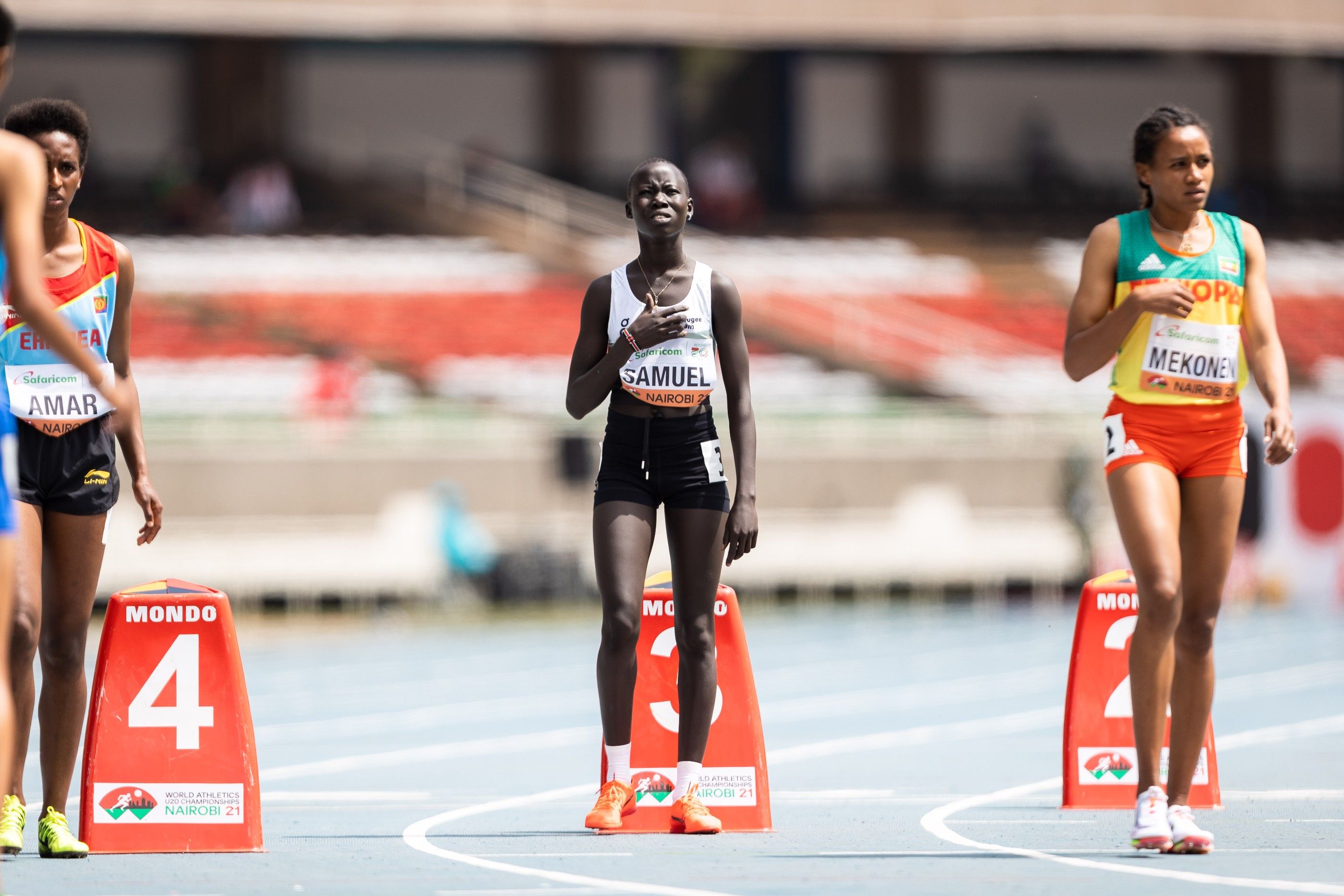 Kiptugen, who accompanied the team as Covid-19 liaison officer, had spoken about the chemistry he observed within the group. Boarding a plane and staying in a four-star hotel for the first time ever gave them moments of laughter as they teased each other. They would also analyse and give each other advice after their respective races. He said that the whole experience not only motivated them but also helped improve their English and mathematics as the population in Kakuma is dense and “individual” attention to students is not possible.

At the training camp in Ngong, they got one-to-one attention. As the ART project developed, he was encouraged to see the growing link between sports and academics for this category of athletes as he believed it opened better future perspectives. Referring to those heading for further education, he said: “For a year,  they have an opportunity to migrate legally thus enabling for an exit strategy.” On a personal level, this group of ART U20 athletes left him with a deep sense of fulfilment because he saw that “what we think is small, makes a world of difference to others”. He believed that there is talent in the refugee camps, but they are lacking experienced sports staff, facilities and a clear framework to develop sporting skills.

Without a coach there is no team, and having one who can relate to one’s struggles is even better. Arakaza left Burundi in April 2016 after allegations that he was organising demonstrations against the government.

He had been a gym instructor in university, so naturally he took up coaching in Kakuma and Kalobeyei where he trains 25 elite refugee athletes. Interacting with the athletes, it's clear to see his interest in their wellbeing. For example, he allowed them to use his phone to call their parents regularly because he understands that reassurances on both sides is fundamental to their well-being and performance.

There are no gym facilities in Kakuma and Arakaza has had no formal training in athletics but refers to a programme designed by Nahason Gitonga Karuri, an athletics coach in Kakuma who also initiated him into coaching. Arakaza would like more visitation from the TLPF to Kakuma and promises that with more skills and the right support, he can produce world-class refugee athletes.

Finally, there was the ever-smiling matron, Lopilale, a mother figure who had previously chaperoned a team to Tampere, Finland. “The team from Kakuma was a team with a difference,” she says. Their innocence and outgoingness uplifted her spirits as they started training the following day. Then, when they arrived at the Ole Sereni Team Hotel, the athletes kept asking if they were really in Kenya or abroad. At the dinner table, they were surrounded by people of different nationalities. When chatting with their parents and guardians, the youngsters opened up to her and she could see the joy and broad smiles that made heads turn from nearby tables.

Constantly busting with innocent but genuine laughter, a hallmark of the team, they became favourites of the hotel staff. At one point, they asked what PB (personal best) meant and when they understood, Alice said that she wants their performances to be quoted at the next edition in Cali, Colombia. Emmaculate added: “they will now not only be competing with individuals but will be competing with time!" These were the most motivating statements Lopilale heard from the team.

These U20 athletes may not have returned to Kakuma and Kalobeyei refugee camps with any medals, but they gained a powerful message of hope which could prove pivotal in their future development, on and off the track.

BACK
Pages related to this articleCompetitions
World Athletics U20 Championships